Megan has lived in North Carolina since she was born in Tarboro, a little town in Eastern NC.

When she was young her family moved west to Durham, then west again to Chapel Hill where she was raised most of her life. She kept moving west when she attended Johnson and Whales University of Charlotte where she received an Associates in Hospitality. After college, Megan moved (you guessed it, west!) to Asheville and worked as a merchandiser for Stacy’s Greenhouses and Van Wingerden. She also worked at Spice & Tea Exchange downtown for 3 years mixing and selling spice blends.

In order to take advantage of her hospitality background, she switched over to working for a local Bed and Breakfast while also working part time in the farm store at Hickory Nut Gap.  Since 2014, Megan has helped the farm grow in their experiential offerings to customers. Whether it be hosting the well-received Renaissance Faire or touring school children around the farm, Megan has hospitality down to a science. She is now the Events Manager for the farm and actively manages a growing calendar of 50+ major events a year.  In her spare time, she loves fencing, participating in the Asheville symphony chorus, playing dungeons and dragons, crafting, and hanging out with her fur family; a cat named Peach and a dog named Turnip. 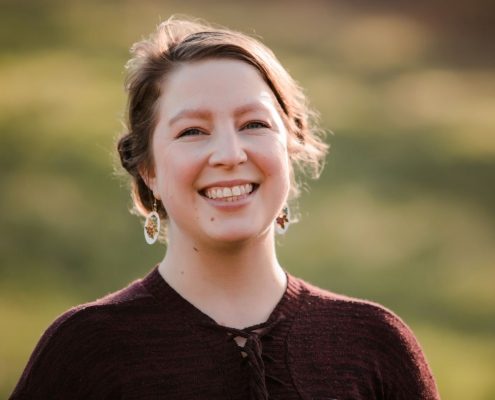