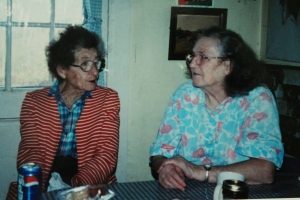 As a family business passes through generations of management the culture of the family business  also shifts appropriately.  At the turn of the century things at the farm experienced a change of guard in its own right.

There is a strong oral history in this family telling of the times when Jim, Susie, Annie, Billy, Bobo, Dumont, Mark, and Doug were being raised by Jamie and Elspeth which involves stories about the people that were helping to run HNG from the 1920s through 2000. Most of the employees were local Appalachian people who knew and experienced homesteading as the way things were, out of necessity. Growing a large garden, canning and putting food by, chicken killing day, hog butchering, curing hams, milking cows, picking apples, growing corn and tobacco and feeding a large farm crew each day were some of the tasks getting done. The stories about these folks who made life tick at HNGF are told to our children near bedtime by their grandmother, Granny Annie who reminisces about life during those times and keeps the memories alive. 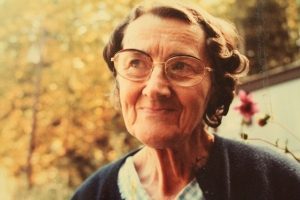 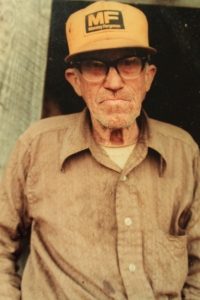 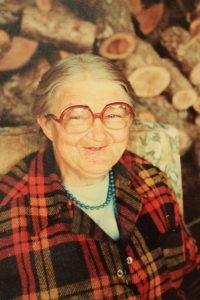 I came to HNGF young, idealistic and in love in the year 2000. There were a few of these folks still around when I came to dwell in the Spring House Cottage behind the Big House. Grace, Clarence and Elle Early were some of the teachers of my early learning at the farm. I particularly took to Elle Early and her fierce spirit which true to her name got her out of bed and on the phone by 7:00 to arrange her transportation to work that day. Jamie and I ate breakfast with Granny (Elspeth) in the mornings and one of us usually took Elle home while Annie Ager, who was also up at ’em early, would usually swing by to pick her up and bring her in to work. A usual suspect on the menu at Big House breakfast were fried eggs as there were usually plenty of cracks from egg washing the day before. Granny liked her eggs more on the hard side as she didn’t like “Ager eggs” particularly which tended to be runny. The three of us spent alot of mornings eating together. Jamie and I listening to the long list of things Granny was going to accomplish-people to see and care for, meetings she was to attend and what she was leaving for Elle to get done that day.

Grace McAbee and Elle Early worked at the Big House, mostly on different days as they weren’t the best of friends; doing house keeping, getting flowers for the table, washing eggs, cooking lunch, harvesting and canning the garden bounty and working the apple stand when needed.

Grace was Clarence’s mother. She married at 13 and raised her family of 6 in a one room cabin with a loft just up the road from the farm. Her son Clarence has been a fixture at the farm for nearly 30 years and he still helps with the laying hens and taking care of the Big House repairs. Grace shared pickle recipes with me and taught me how to make apple butter and raspberry jam. She showed me that mayo and yogurt can be substituted in your cornbread and taught me how to feed a crew of twelve people for lunch multiple times a week.

Elle grew up in what used to be the heart of Fairview near Church Rd and walked to the old Fairview School, as she put it, each day. At the time when I first met Elle Early (cursive captial L as she signed her name) was in her mid eighties. On breaks between ironing and cleaning out the fridge you could find her drinking a Pepsi she had been cooling in the fridge that morning and smoking a Lucky Strike cigarette. She had a knack for telling you what she thought and more than a few young, long haired men got a good talking to for the length of their hair and how they should cut it, less they wanted to be mistaken for a girl. Her sense of humor and wit were something I always appreciated as she would catch you off guard if you weren’t quite listening with a good jab or joke aimed at something happening in the kitchen that day. We got to know each other over the years and she would invite me in to thank me for the ride with a piece of pound cake or a cutting from a plant she was growing that I was instructed to take and plant right when I got home. We often walked her gardens, talked about how things were growing and I’d water her plants for her as she put away the groceries we had just bought.

Elle was as fierce in personality and in her thriftiness. I have been by her side when she returned a black Sharpie marker that had dried out and demanded her money back at Food Lion as well as intimidating the sales associate into giving her the discount on Puffs tissue even though the coupon was for Kleenex. She shopped at Ingles as that was the only grocery store near Fairview for a good while but refused to buy Laura Lynn brand anything because she “never like anything that woman made.”

She passed away at age 96 but I still have two sweaters she thought I might like because they were really good to keep a person warm as well as a blanket she crocheted for Cyrus which she gifted us on her first visit to meet him a week after he was born. I reveled at the fact that she made this and the effort put into it because at the time she must of been nearly blind.

During the spring as I drive past her old house on the way to town I always feel a longing to walk her garden to see whats coming up and help her with the little things around the house but as time has passed so has her era. If she was still around I sure could use her energy and gusto at the farm as I know she would keep us all in line. When I’m in my eighties I hope to embody her abilities and appreciation for work well done when I am on that side of life at HNGF.

So there is a city, far far away, where a man named Hobson Dobson lives. Hobson Dobson has super human abilities. He can save people when they are in danger, he can fight the bad guys and do pretty much anything a four year old can imagine whose daily mode of operation was keep up with his big brothers abilities. Hobson Dobson came in to our lives via the vivid imagination of our youngest and his best friend and cousin Hythe.

Hythe’s mother comes from Elizabeth City and I am from Louisville. His mother and I often go back home to visit our families, at least four times a year in fact, so one day when the little boys were talking about their upcoming travel plans it made sense to Levi that he should have a city too, just like Hythe’s Elizabeth City. 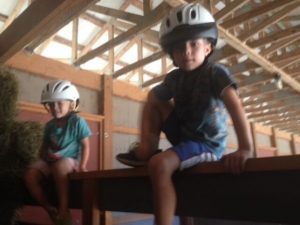 Well Levi’s city, as it became known in our family, was a magical place where all things can be done. If Jamie and I were having a conversation about a challenge on the farm Levi would always be able to solve our problem with a story from his city. When we pursued a line of questioning to learn more about his city (at the time I was pretty interested in relocating there) we found out there was a man named Hobson Dobson who lived there too. Hobson Dobson had a dog named the sound “kheec” and together they were all a spectacular bunch working with superhuman powers to accomplish all things a lively four year old wishes he could do in a day without the handicap of size, strength or age holding him back.

Conversations in the morning while we are feeding the kids breakfast and working out logistics on efficiently driving to and from town each day, often involve discussions about how other farmers are making their cattle business work, when we are taking a load to a different farm to custom graze or how many animals are coming back from the processor that day. As many of you know anytime the adults are talking the little ones are always listening.

One of our long time farmer friends and collaborators is Sam Dobson. We met Sam at a Young Farmer and Rancher Event hosted by Farm Bureau back in 2005. He is the most outgoing dairy farmer I’ve ever met. That day he had on a suit complete with a Holstein tie but the other 364 days of the year you will find Sam in jeans and an old t-shirt milking his organic cows in Iredell County twice a day. In between milkings he feeds, works the fields planting and harvesting alfalfa, and cover cropping clover and triticale for his dairy cows. Sam also manages a beef herd which he cares for daily, moving their break fences as well as fences for our calves which he custom grazes. Sam’s land was deeded to his family by the queen, and they have been a thriving farm ever since. Four generations still have a presence at the farm including his grandmother, his parents and his wife Sherry and son Chase. 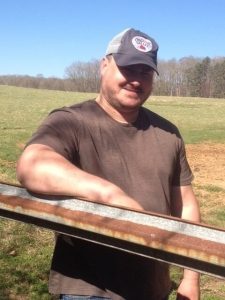 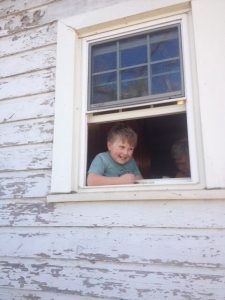 Sam has always grazed his dairy cows because it was the best way to keep up the health of his animals and their milk production balanced with cost and efficiencies. Lucky for us Sam Dobson figured this out just about the same time our business was growing so fast that we could no longer supply our wholesale customers with meat from animals grown on our own leased 290 acres. Sam had a know how, the equipment, and the land base available to finish steers consistently on 100% grass. Over the last ten year he has become a key partner in Hickory Nut Gap Meats production and forage chain supply. He is also plays the role of Livestock Coordinator and Consultant for the dozen other farmers who grow beef for our program.

He is passing along his farming and business acumen to his eight year old son as well. When we stopped by yesterday on our way back from a farming panel discussion in Virginia we found Chase out back taking care of his organic laying hens. He came to his dad last week announcing that he was looking for about four $10 investors to help pay the grain costs until his chickens started laying. The return on investment once they started laying is 2 dozen eggs. After admiring Chase’s operation and set up Jamie pulled a ten dollar bill from his wallet and gave it to Chase. He glowed and so did his mom and dad while we did some calculations about how much revenue he was looking at once he opened the farm stand to sell the eggs.

As far as I’m concerned I think Levi hit the nail on the head. Hobson Dobson is alive and well in the big city of 2000 acres called Dobson Farm. The only thing he missed was the dog’s name which is Freckles not Kheec. 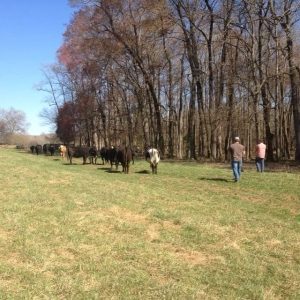 KEEP IN TOUCH TO LEARN ABOUT THE FARM, OUR SPECIAL OFFERS AND NEW PRODUCTS

Do you really want to delete card?

This process cannot be undone.

Card has been deleted successfully.